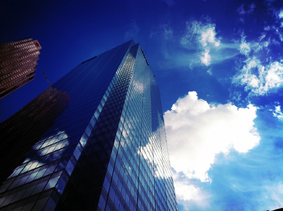 The 51-story skyscraper known as Bay Adelaide West, a part of the Bay Adelaide Centre located in Toronto´s Financial District on 333 Bay Street, serves as the office of Pearson Specter Litt. It is often featured on establishing shots, exterior shots and shots of the lobby.

Fairmont Royal York lobby shot was featured in episode “Inside Track”, seen as a hotel's lobby where a board meeting of McKernon Motors was held. The lobby scene of Harvey and Jones DeBeque's meeting with Daniel Vega and Vega's attorney Dana Scott in DeBeque's hotel (episode “Play the Man”) was filmed in the lobby of The Ritz-Carlton Hotel on 181 Wellington Street West.[2]

The most seen set in the series is the one of Pearson Specter Litt's office. It includes Harvey Specter's office with his secretary Donna Paulsen's desk, Jessica Pearson's office, which used to be Daniel Hardman's before he left the firm in 2007, Louis Litt's old office (since the episode “Breakfast, Lunch and Dinner” belonging to Jeff Malone), corner's office currently belonging to Louis Litt (before Hardman's comeback it was a library, then Hardman's office and after his dismissal belonging to Stephen Huntley, Dana Scott and then for a short time to Jeff Malone), Mike Ross' office (old Harvey's office), Rachel Zane's office, associates' bullpen, associates's kitchen (also known as the water cooler area), library, bathroom, conference room, hallway and file room.

The Manhattan scenery behind the windows is made in form of mural backdrop (one for a daytime and another for a nighttime scenery).[3]

Retrieved from "https://suits.fandom.com/wiki/Filming_locations?oldid=17070"
Community content is available under CC-BY-SA unless otherwise noted.